If you are not already a member of WineAmerica, join now!

Background Music (Andy Williams): “It’s the most won-der-ful time of the year…”

Twas the week before Christmas

And all through the House

The Members were voting

And continuing to grouse

Ah yes, after the ongoing border wall kerfluffle and the on-and-off threats of a government shutdown, here we are on the Friday before Christmas with continuing uncertainty about whether the Departments of Agriculture, Justice, State, NSA and others will be shut down and nearly a million government employees won’t be paid for as long as the shutdown lasts.

About 10 days ago, President Trump held a live TV meeting in the White House with Senator Chuck Schumer and Representative Nancy Pelosi during which he told them that if he didn’t get funding for his border wall, he’d be “proud” to shut down the government, and wouldn’t blame them (to their glee).

Then the atmosphere temporarily softened, and the Congress and President seemed to agree on a regular feature of Washington politics called a “Continuing Resolution” (CR), which some describe as “Kick the Can down the Road” when they can’t come to agreement on time. So Congress passed a CR to keep the government functioning until they have the chance to argue again.

Not so fast: After the House and Senate passed the CR, the President said he wouldn’t sign it, so it’s now back in the lap of Congress with border wall money, but that’s not likely to get passed. And, most recently (this morning’s tweet), the President threatened that it would be a “very long” shutdown if he didn’t get his way.

The deadline, when those government agencies actually run out of money, is midnight tonight, so we won’t have to wait too much longer to know the outcome.

It’s amazing what a nice, peaceful town Washington can be when the politicians go home for the holidays. Actually, a number of those who didn’t get re-elected never even returned to DC after the election (but still collected their paychecks, of course).

Now they’ll soon all be gone, and Washington will become quite a civilized place.

Background Music (Everyone, a tad tipsy): “Should auld ac-quain-tance be for-got, and ne-ver brought to mind…”

So now that 2018 will soon be just a memory, we head into a new year with a new balance of power in Washington, and the question of whether civility, compromise, and competence will ever return. Let’s hope that 2019 will be a…

It seems like yesterday, but was actually a year ago that the 2017 Tax Cuts & Jobs Act was passed, including within it the federal excise tax reductions for wine, beer and spirits created by the Craft Beverage Modernization and Tax Reform Act.

Then just yesterday, the President signed the massive five-year Farm Bill that will continue to fund wine industry priorities in the areas of research, export promotion, and block grants, among many other things.

These two events are like bookends reflecting the work WineAmerica staff and lobbyists Meyers & Associates have been doing over the past few years. The success is very gratifying because it helps the industry we serve.

As Frank Sinatra would have crooned, “It Was A Very Good Year.”

As we wind up 2018 and prepare for 2019, it’s worth briefly looking backward at accomplishments and forward at challenges.

Tax Reform: For a year now, American wineries of all sizes have been saving significant money on federal excise taxes due to inclusion of the Craft Beverage Modernization and Tax Reform Act (CBMTRA) in the Tax Cuts & Jobs Act.

WineAmerica worked closely with Wine Institute and beverage coalition partners in the beer and spirits sectors for over two years to achieve this success. Coordination with our grassroots State and Regional Associations Advisory Council, plus Oregon and Washington groups, also helped to get widespread support in Congress–with 305 Representatives and 55 Senators co-sponsoring the bill, a rare bipartisan show of support in today’s Washington.

The bill includes a series of tax credits which lower the effective tax rate on various levels of production, and may be used on sparkling wines as well as table wines. In addition, for tax purposes the alcohol by volume (ABV) limit for table wines was increased from 14% to 16%.

However, the bill is also set to expire on December 31, 2019 which, if that occurred, would reverse all the benefits.

WineAmerica Vice President Michael Kaiser is the resident expert in this area.

Glitch Fix: Alas, as often happens when complex bills are rushed through Congress at midnight, technical errors occur, and this one was no exception.

The problems had to do with the application of the new tax system to custom crush facilities and bonded wine cellars, and could have had very damaging effects. Once again, WineAmerica worked closely with Wine Institute and the Napa Valley Vintners Association to start fixing the glitches, some of which have already occurred.

It is important to note that when all the glitches are fixed, the corrected system will be retroactive to January 1, 2018, so wineries will eventually be made whole.

Farm Bill: As reported last week when Congress passed it, the five-year Farm Bill is a big deal for the American wine industry, in part because its multi-year timeframe allows planning for research and promotion.

There are many provisions that could benefit our industry, but the most vital ones–funding for research, export promotion, and block grants–all ended up very well. Now our staff and lobbyists can take a few years off from this issue until negotiations begin on the 2023 Farm Bill.

Trade Policy: The major result this year was part of the USMCA (United States-Mexico-Canada Agreement) which amended and replaced NAFTA. WineAmerica worked with Wine Institute to ensure that American wines could be sold in British Columbia, Canada grocery stores, which previously was forbidden.

Music Licensing: WineAmerica Vice President Tara Good has been working diligently for several years to protect American wineries from unfair and predatory practices by Performing Rights Organizations such as ASCAP and BMI.

In October, the Music Modernization Act included language that protects Justice Department Consent Decrees on those companies. Tara has also negotiated with both companies directly, resulting in a winery-specific license from ASCAP as well as a 10% discount for WineAmerica members.

WineAmerica informed the broader industry about the issue, including through our State and Regional Associations Advisory Council, and drafted guidelines for member wineries.

Membership: Perhaps because of all those and other accomplishments, 2018 was the strongest year in WineAmerica’s history for generating new memberships.

We gained over 50 new members from around the country, bringing our total to over 500 in 44 states. In addition, many new members are marquee wineries such as Channing Daughters and Wolffer Estate in New York, Duplin in North Carolina, Ste. Michelle Wine Estates in Washington, Chateau Montelena and Tablas Creek in California. We even got Bear Creek Winery & Resort in Alaska!

We accomplished a lot in 2018, but we have just as much to do in the coming year.

Tax Bill Extension: This is priority #1, because if we don’t get it extended beyond December 31 or made permanent, all the tax benefits wineries have enjoyed this year will be gone. (We will also be working on the remaining tax bill glitches at the same time.)

Trade Policy: Congress still needs to approve the USMCA, so we will be working to make that happen.

Music Licensing: There is always more work to do on this, both from regulatory and legislative standpoints.

Immigration Policy: This may be the most complex and contentious of all issues, but that doesn’t mean we can ignore it. We need to keep advocating for a stable, reliable, motivated migrant labor force for the American wine industry.

TTB Liaison: They have asked for comments on the AVA system and label-related issues, which we will be coordinate on behalf of the American wine industry.

Spray Drift from Other Crops: This seems to be an increasingly widespread problem with wineries in many areas of the country. WineAmerica will be conducting a survey at the beginning of the year to assess the extent of the problem, and possible solutions.

Membership Development: WineAmerica is stronger today than it has been in many years, thanks to an engaged Board of Directors, excellent staff, superb lobbyists, and all of our members. But we still need to grow, and we welcome wineries and winery associations from all over the country to join us.

Secrets of Success: Prioritization, Persistence, and Partnerships form the key blend in moving legislation over the finish line. Our WineAmerica team clearly articulates the wine industry’s needs, keeps repeating that message, and joins with other groups to make it all happen.

Another reason for WineAmerica’s effectiveness in the area of national grassroots public policy is the large number of winery members from 44 states–which means 88 U.S. Senate offices and hundreds in the House of Representatives. The map below shows states where our members are from (other than those shown in white which have none–though we’re working on them!) 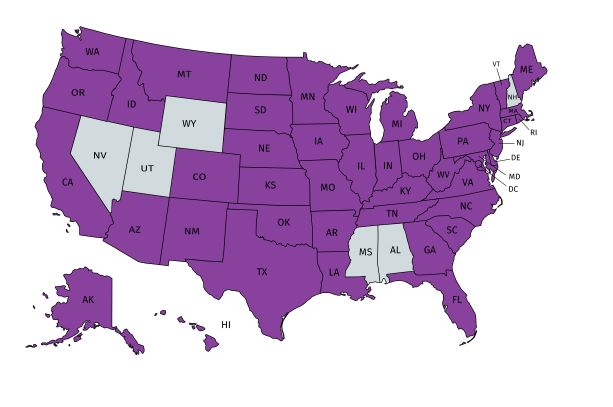 (States in purple represent WineAmerica’s membership, and we were delighted to recently turn Alaska purple.)

If you are not already a member of WineAmerica, join now!

May you have a wonderful holiday season, and sprinkle random acts of kindness on many others.

You can find out more about which cookies we are using or switch them off in settings.

This website uses cookies so that we can provide you with the best user experience possible. Cookie information is stored in your browser and performs functions such as recognising you when you return to our website and helping our team to understand which sections of the website you find most interesting and useful.

Strictly Necessary Cookie should be enabled at all times so that we can save your preferences for cookie settings.

If you disable this cookie, we will not be able to save your preferences. This means that every time you visit this website you will need to enable or disable cookies again.